Curcumin is a bright yellow chemical produced by Curcuma longa plants. It is the principal curcuminoid of turmeric (Curcuma longa), a member of the ginger family, Zingiberaceae. It is sold as an herbal supplement, cosmetics ingredient, food flavoring, and food coloring.[1]

Chemically, curcumin is a diarylheptanoid, belonging to the group of curcuminoids, which are natural phenols responsible for turmeric's yellow color. It is a tautomeric compound existing in enolic form in organic solvents and in keto form in water.[2]

Laboratory and clinical research have not confirmed any medical use for curcumin. It is difficult to study because it is both unstable and poorly bioavailable. It is unlikely to produce useful leads for drug development.[3]

The most common applications are as an ingredient in dietary supplement, in cosmetics, and as flavoring for foods, such as turmeric-flavored beverages in South and Southeast Asia.[1] As a food additive for orange-yellow coloring in prepared foods, its E number is E 100 in the European Union.[4][5] 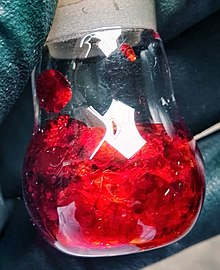 Curcumin incorporates several functional groups whose structure was first identified in 1910.[6] The aromatic ring systems, which are phenols, are connected by two α,β-unsaturated carbonyl groups. The diketones form stable enols and are readily deprotonated to form enolates; the α,β-unsaturated carbonyl group is a good Michael acceptor and undergoes nucleophilic addition.

Curcumin is used as a complexometric indicator for boron.[7] It reacts with boric acid to form a red-colored compound, rosocyanine.

The biosynthetic route of curcumin is uncertain. In 1973, Peter J. Roughley and Donald A. Whiting proposed two mechanisms for curcumin biosynthesis. The first mechanism involves a chain extension reaction by cinnamic acid and 5 malonyl-CoA molecules that eventually arylize into a curcuminoid. The second mechanism involves two cinnamate units coupled together by malonyl-CoA. Both use cinnamic acid as their starting point, which is derived from the amino acid phenylalanine.[8]

Plant biosynthesis starting with cinnamic acid is rare compared to the more common p-coumaric acid.[8] Only a few identified compounds, such as anigorufone and pinosylvin, build from cinnamic acid.[9][10]

Curcumin, which shows positive results in most drug discovery assays, is regarded as a false lead that medicinal chemists include among "pan-assay interference compounds". This attracts undue experimental attention while failing to advance as viable therapeutic or drug leads.[3][11][12]

Factors that limit the bioactivity of curcumin or its analogs include chemical instability, water insolubility, absence of potent and selective target activity, low bioavailability, limited tissue distribution, and extensive metabolism.[3] Very little curcumin escapes the GI tract and most is excreted in feces unchanged.[13] If curcumin enters plasma in reasonable amounts, there is a high risk of toxicity since it is promiscuous, and interacts with several proteins known to increase the risk of adverse effects, including hERG, cytochrome P450s, and glutathione S-transferase.[3]

As a component of turmeric, curcumin may interact with prescription drugs and dietary supplements.[14] In high amounts, it may be unsafe for women during pregnancy.[14] It may cause side effects, such as nausea, diarrhea, hives, or dizziness.[14]

Two preliminary clinical studies in cancer patients consuming high doses of curcumin (up to 8 grams per day for 3–4 months) showed no toxicity, though some subjects reported mild nausea or diarrhea.[15]

In vitro, curcumin exhibits numerous interference properties which may lead to misinterpretation of results.[3][11][16] Although curcumin has been assessed in numerous laboratory and clinical studies, it has no medical uses established by well-designed clinical research.[17] According to a 2017 review of more than 120 studies, curcumin has not been successful in any clinical trial, leading the authors to conclude that "curcumin is an unstable, reactive, non-bioavailable compound and, therefore, a highly improbable lead".[3]

The US government has supported US$150 million in research into curcumin through the National Center for Complementary and Integrative Health, and no support has been found for curcumin as a medical treatment.[3][18]

Bharat Aggarwal was a cancer researcher at the University of Texas MD Anderson Cancer Center, who as of April 2018 had 19 papers retracted for research fraud.[19][20] Aggarwal's research had focused on potential anti-cancer properties of herbs and spices, particularly curcumin, and according to a March 2016 article in the Houston Chronicle, "attracted national media interest and laid the groundwork for ongoing clinical trials".[21][22][23] Aggarwal co-founded a company in 2004 called Curry Pharmaceuticals, based in Research Triangle Park, North Carolina, which was seeking to develop drugs based on synthetic analogs of curcumin.[22][24] SignPath Pharma, a company seeking to develop liposomal formulations of curcumin, licensed three patents invented by Aggarwal related to that approach from MD Anderson in 2013.[25]

Though there are concerns about safety or efficacy and the absence of reliable clinical research,[3][11] some alternative medicine practitioners give turmeric intravenously, supposedly as a treatment for numerous diseases.[26][27][28] In 2017, there were two serious cases of adverse events reported—one severe allergic reaction and one death—that were caused by injection of a curcumin emulsion product administered by a naturopath.[29][30]

Curcumin was named in 1815 when Vogel and Pierre Joseph Pelletier reported the first isolation of a "yellow coloring-matter" from the rhizomes of turmeric.[31] Although curcumin has been used historically in Ayurvedic medicine,[32] its potential for medicinal properties remains unproven as a therapy when used orally.[3][11][33]